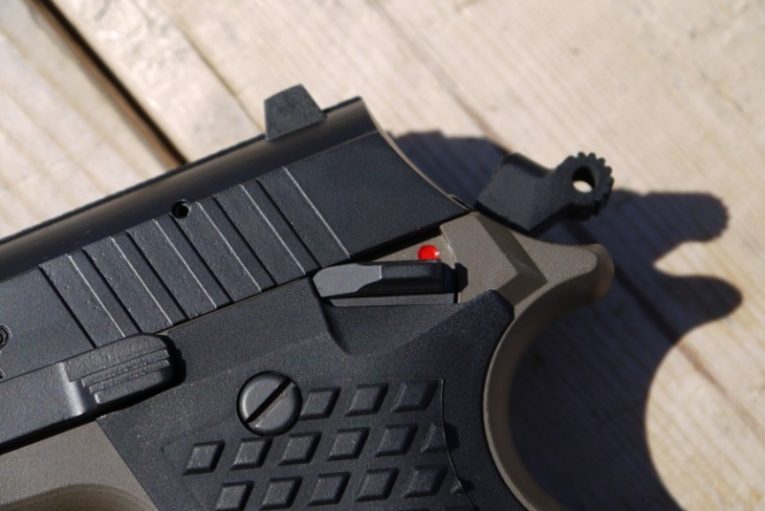 Most modern guns have one or more mechanical devices or subsystems designed to reduce the likelihood of an inadvertent discharge. These subsystems are collectively known as “safeties.” Generally, safeties can be either “active” or “passive.” Today, we’ll cover active safety systems—those that are intentionally activated and deactivated by the user. (Passive safety systems work without your direct intervention.) Safeties are generally located on the firearm in close proximity to the thumb or index finger of the shooting hand, which allows the user to engage or disengage the safety without disturbing his or her grip.

1. Sear-Blocking Safeties
The sear is the action component of the firearm that holds the hammer or striker in the cocked position; when released, it permits firing. Some safeties work by preventing the sear’s release until the user disengages the safety. Examples of sear-blocking safeties include the thumb safety on the M1911 Government Model and Browning Hi-Power pistols.

Either of the above safeties will reliably prevent the gun from firing—IF the safety system is in proper working order. This may not always be the case with guns that are older, much-used, or that have been abused or neglected. Even in a new firearm, the engagement between the trigger and the sear or hammer, or between the sear and the hammer or firing pin, may be only about the thickness of a single credit card. Wear or improper trigger adjustment (either from the factory or, more commonly, from home gunsmithing) can sometimes reduce this slim margin to the point at which dropping the gun, or even closing the action briskly, can cause the trigger or sear to release even with the safety engaged. For this reason, some gunsmiths and firearm authorities consider a safety that solidly blocks the hammer or firing pin to be more secure than the other types of active safeties. This brings us to #3:

3. Hammer- or Firing-Pin-Blocking Safeties
The swinging safety mounted on the bolt shroud of Winchester and Mauser bolt-action rifles retracts and locks the firing pin rearward, and thus is of the firing-pin blocking type.

4. Between Your Ears
Your brain is the most critical “active safety system” there will ever be. When you follow the Three Rules of Gun Safety—and ensure that everyone around you does the same—if the mechanical devices that keep the firearm from discharging ever fail, injury can be avoided. So:
ALWAYS keep the gun pointed in a safe direction. This means that even if the gun were to fire, it would not cause injury or damage. Common sense will dictate the safest direction, depending upon the circumstances.
ALWAYS keep your finger off the trigger until you’re ready to shoot. When holding a gun, rest your trigger finger outside the trigger guard alongside the gun. Until you are actually ready to fire, do not touch the trigger.
ALWAYS keep the gun unloaded until ready to use. Unless the firearm is being kept in a state of readiness for personal protection, it should be unloaded. That said, never assume a firearm is unloaded, even if you